Beyond Bitcoin: the potential for blockchain

There are some areas of new technology in which the terminology seems to be more widely used than is actually understood. That seems to be the case with blockchain – a word that pops up with ever-increasing regularity but, as a quick Google search will demonstrate, a technology that has spawned a host of ‘what is blockchain?’ pages and countless attempts to explain the concept.

Blockchain gets confused or aligned with Bitcoin in the eyes of many. However, Bitcoin is a very successful example of an application that uses blockchain technology. But blockchain can be so much more.

So, here we go: in simple terms, blockchain is a bit like a global database or record of interactions, but the twist is that the database is not centralised, nor is it sitting on one single server. It is distributed across the network and, furthermore, all the blocks of data are interlinked or chained together. When you add or remove something from the chain, all the other blocks in that chain everywhere on the network are notified and can take appropriate action. And because no one person, server or database owns or stores the entire chain, there is no central point for a hacker to attack.

Blockchains can be set to be public or private, and the technology represents a secure, interconnected, distributed network where all the transactions are open and transparent for the participants to inspect, but not for anyone to hijack. In the case of Bitcoin, that allows any one person or organisation to transact directly with any other person or organisation without the need for a third party – such as a bank – to host the exchange.

It is a difficult concept to grasp at first, so it helps to use a real-world example to show how blockchain could revolutionise one industry: music.

The music business is a prime example of an industry where the impact of the digital revolution has been profound. Spin back a few years and music industry sales were easy to track; physical pieces of hardware, such as CDs, tapes and Vinyl were involved, and artists could be rewarded accordingly. However, the physical nature of the sales channel created a host of intermediaries, all taking their own cut of the proceeds. These included the publisher, the plant manufacturing the hardware, the distribution network and the retail store, to name a few.

Digital downloads removed the retail store and the hardware element from the chain, but ‘record companies’ still controlled the publishing, and the digital distribution network turned Apple Music, Spotify and Amazon into giants of the music world. Despite the fewer links in the chain, the artists’ cut of the sale was further reduced in real terms as the consumer cost of ownership fell – individual tracks being sold for less than one pound, and virtually unlimited ownership of entire music catalogues being offered for a subscription of just £10 a month.

To make it even worse, mobile network operators started to bundle music into their consumer offers – “choose this tariff and get Spotify free”, for example. In this transactional world, the artist sits very firmly at the bottom of the chain when it comes to the proceeds. What’s more, there is the added factor that it has become far too easy to share pirate copies of the recordings with zero return to the artist.

So how does blockchain technology change this situation? The answer – not only can it reduce or eliminate the role of the middlemen, it can also put the artist firmly in control of the value chain. Here’s how: one feature of blockchain that often gets referenced in articles is its ability to produce an invoice that pays itself.

This example is usually related to a service that can be monitored in some way. For example, if I sell you a device, we can create a blockchain purchase order and invoice against the transaction. When the device is activated and connected to the network, it is recognised within the blockchain and the invoice automatically gets processed and paid.

This concept has virtually unlimited potential in the music industry, and across any form of digital rights management. With blockchain, an artist can effectively create and publish a smart invoice for each of their recordings. Any consumer can make a payment against that invoice to automatically trigger a download of the digital music file in the format of their choice.

The artist now has a direct connection to the consumer and receives the payment directly. It doesn’t matter what file format the consumer chooses, or which music service they use. Nor does it matter if it is on Windows, Mac, Apple or Android, or indeed which network they use to download the file. Each and every download, everywhere in the world, regardless of format or function, triggers a payment directly to the artist who produced the recording.  The artist effectively becomes the publisher and the distributor, and blockchain takes care of whether any other party involved needs a share.

With blockchain, pirate copies become a thing of the past as the encryption lives within the file. Pass it to another consumer and the file will transfer, but will not decrypt without a payment to the artist. 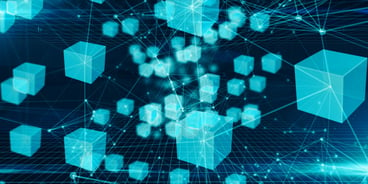 This is one just example in one industry. There are countless others – how about car insurance that identifies not just the miles being driven but also compares data from multiple sources to assess the risk factor of the roads that a driver regularly uses in order to adjust premiums accordingly. Blockchain is like big data on steroids - multiple sources, all interlinked, co-dependent, secure and capable of providing insight, interaction and action.

Within the telecoms industry, blockchain has the potential to revolutionise aspects of service delivery, settlement and integration. We’ve already touched on how payments can be triggered when devices go live on networks. Using blockchain to automate that process in a 20 billion device IoT environment – one that might see millions of devices go live virtually simultaneously - is the only way that the billing process can be expected to cope efficiently and accurately with the scale of the challenge.

The use of blockchain technology in telecoms will certainly see settlement link more directly to service, especially quality of service. Service providers hitting their SLAs get full and prompt payment; miss them and penalties are automatically applied. Blockchain will also help as networks embrace virtual technology and become more dependent on software.

This is especially true in a 5G environment with its concept of network slicing where the operator can provide different types of services within one small network coverage area. In situations where network requirements are constantly changing and potentially affecting the network load in surrounding areas, blockchain technology could help network management and orchestration systems understand and react to changing circumstances, making it easier to understand how a service change in one part of the network might affect conditions and require change elsewhere.

We are only scratching the service of what blockchain could deliver. Over the next year or so, we are likely to see the technology make a real impact across a wide range of industries and businesses, with telecoms and business support systems at the forefront.